Let’s say we have a directory called O that contains a large number of subdirectories and files.

We find ourselves with two different directories, A and B. Each of them started as a copy of O, but then, in each of them, some files were changed, some were added or removed, and we don’t know which ones.

We want to compare the contents of A and B, for instance to merge them back into O.

There are several ways to solve the problem, depending on the situation. Let’s take a look.

For our first case, let’s assume A and B are on our development computer and we have a graphical session opened.

We can use many GUI tools for this task, here’s an example with Kdiff3: 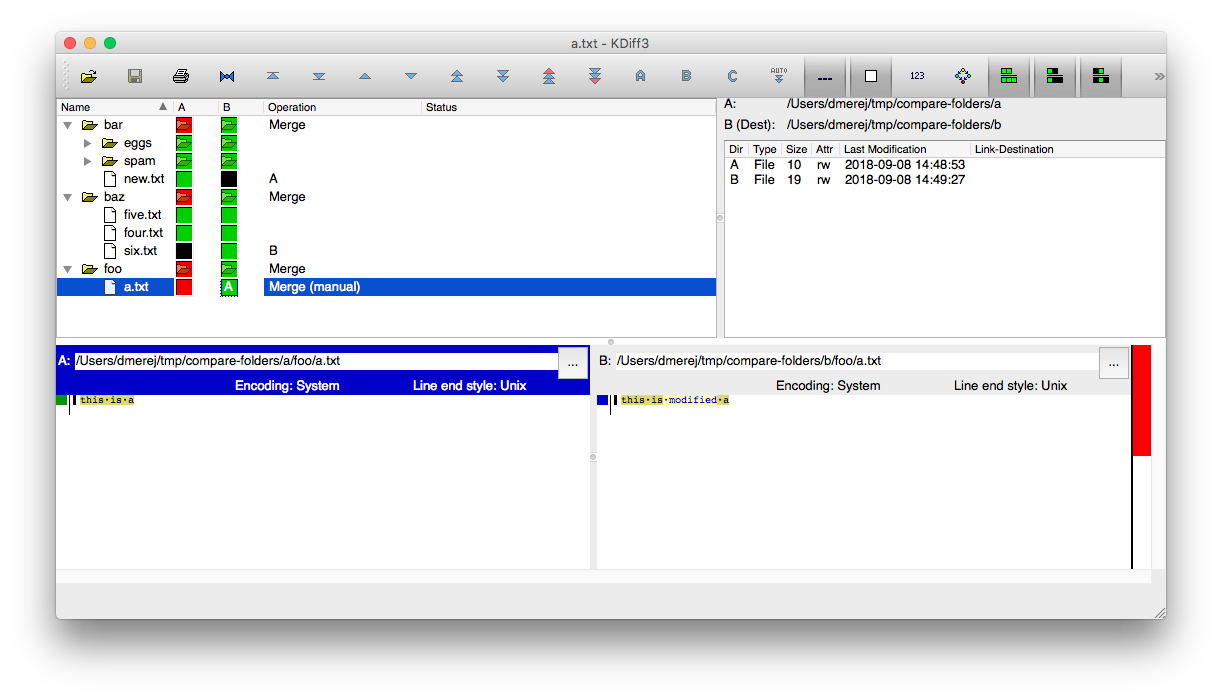 On the top left pane we have an overview of all the differences between the A and B directories, and we can see that:

On the bottom panes, since a.txt is selected, we can see the differences in the contents.

Now let’s assume A and B are both on a remote server running Linux1 and we can’t open a remote graphical session there.

What are our options?

Well, we could use a coreutils command.

Coreutils is a package which is both very old and present in almost any Linux operating system. It contains a collection of useful, small command line programs. Even when it is not installed, an other package (like busybox) is usually here to provide similar functionality.

Anyway, there is a coreutils command named diff we can use for the task at hand:

Boom! All the info we need.

diff offers lots of ways to tweak its behavior2. For instance, we can get more succinct info with the --brief option:

By the way, if git is installed on the remote server, we can also use it, with nice options like --stat or --word-diff3:

Now let’s assume A and B are on two different remote servers: let’s call them abbot and costello respectively.

Also, let’s assume A and B contains lots of big files, so we cannot copy the A directory from abbot to costello and use the previous technique. We can, however, transfer small files between the two servers. Here’s we can do.

Then, we go inside the a directory:

Then we run the following command:

Now, we do the same on costello:

Then we use scp to transfer the A manifest to costello:

Now we have two text files on costello, both containing a list of all the files. So, we use diff on the manifest files themselves:

Well, we can use another coreutils tools called shasum.

shasum can be used to compute a checksum of the contents of a given file. It will generate the same output if the contents are the same, and if two files are different, there’s almost zero chance their checksum will be equal. 4

Here we need to call shasum with the whole list of files, so we call find . again but with the -type f option to select only the files and ignore the directories. This gives us a list of lines, so we use xargs (also in coreutils) to convert them into a list of command line arguments5, and finally write the result in a a.shasum file:

Here are the contents of the a.shasum file:

Now we can transfer the a.shasum file to costello:

Finally, we can use shasum again with the --check option: it will read each line, parsing the file name and expected checksum, then compute the actual checksum for the given file and check if it matches the expected value:

We saw that we can use nothing but command line tools from the coreutils package to compare the contents of two directories: the technique we used was working exactly the same way several decades ago, and will probably continue to work for a long time.

So, if you liked the techniques show here, here’s my advice to you: next time you are confronted with a task similar to the one we just studied, take a look at all of the coreutils documentation and try using them. If you do this often, after a while you’ll have gained a nice addition to your skill set.

Oh, and if you think “this is all useless”, please read this enlightening paper called Command-line Tools can be 235x Faster than your Hadoop Cluster :)