Some time ago, I pinned the following tweet on top of my timeline:

Announce: I’ve decided to no longer follow more than 20 people. Maybe one day I’ll explain why on my blog. (Not sure yet)

Well, it’s time to explain myself, and, as often on this blog, the post will start with a story.

For my French readers, here’s an example:

For those who do not know, Eurovision is a song contest that happens every year.

For French people, it’s fun to watch because:

I remember following the #LTEV hash tag, before it was “official”.

Displaying all the tweets with the hash tag while watching this silly TV show was doable because there was only a few people twitting about it.

Plus, every year, you could watch the show live on TV, follow the hash tag on your computer, and re-unite with people who made you laugh the year before.

I don’t watch Eurovision nor try to use the hash tag anymore.

The hash tag is now displayed continuously during the show, and there’s just too many people using it to read everything in real time. Also, it feels like that people only tweet in order to have their tweets displayed on TV, and lots of tweets take the show much too seriously for them to be fun anymore.

I guess it’s the end of an era.

Since the last 10 years of so, I keep interesting fortunes in a private git repository.

Each file corresponds to a category, and inside the files, quotes are separated by the percent sign and an index1, like this:

So, naturally I started keeping interesting tweets in a fortunes/twitter file.

I still do this to this day. Here are a few taken from last year’s Trump election:

All those files are hosted on a private server, and I have a little command line tool that allow me to randomly display a fortune taken from the whole “database”.

It’s called pyfortunes, and you can find the source on github.

Around the same time I started this blog, I decided to create a twitter account, with the goal of trying to publish at least one tweet per day.

At the time of writing, I’m followed by around 40 people, which is not much.

Most of them are friends, past or present colleagues, and a few acquaintances.

Also, @climagic follows me and that makes me very proud.

Keeping control over my data #

Shortly after posting my first tweets, I decided I needed to have a complete backup of all the tweets I wrote.

Of course, twitter provides a way to get a backup of all your personal data in a zip, but I did not want to depend on twitter being nice.

So I wrote a small script that I can run frequently in a systemd timer job that:

Source code is on github, and you can see it live on my website.

Every night, I would go to twitter.com, and then scroll down again and again until I find a tweet I’ve already read.

But as time passed, and the list of the people I followed grew, I found myself spending more and more time reading my timeline.

There was a few of his tweets that made me laugh, such as:

The fact there’s a highway to hell and only a stairway to heaven says a lot about anticipated traffic numbers.

but some of them were links to pages of a website I did not like at all.2

In the end, I was following more that one hundred people, and it took me about half an hour after work 3 to go through all my timeline and find the one tweet I already read the previous day.

It was a tedious process, because if I lost my current position in the timeline, I had to go through everything back from the top.

A lot of the tweets I read during this process contained links, but I was so concerned about loosing my position in the timeline that I opened them in a new tab and continued scrolling before actually reading them.

So, after I was done with the scrolling, I still had a dozen of tabs opened in my web browser, but I’d lost all context (no way to know what exact tweet lead me to the page I was reading), and I was already exhausted by all the information I had to process.

Twitter (n): a collaborative game where you try to guess what just happened based on a stream of truly awful jokes about the event.

It was then I decided to massively unfollow people.

No more Bill Murray, no more accounts that published interesting stuff 50% of the time, no accounts that were only re-tweeting popular tweets …

I went from following about one hundred accounts to less than thirty, and I decided to never go above that number again.

Now every night I spend less that a minute reading all the things I missed while I was working or sleeping, and the signal versus noise ratio is much better.

I’m also using a native client named corebird, which allows me to go from this, as seen on twitter.com: 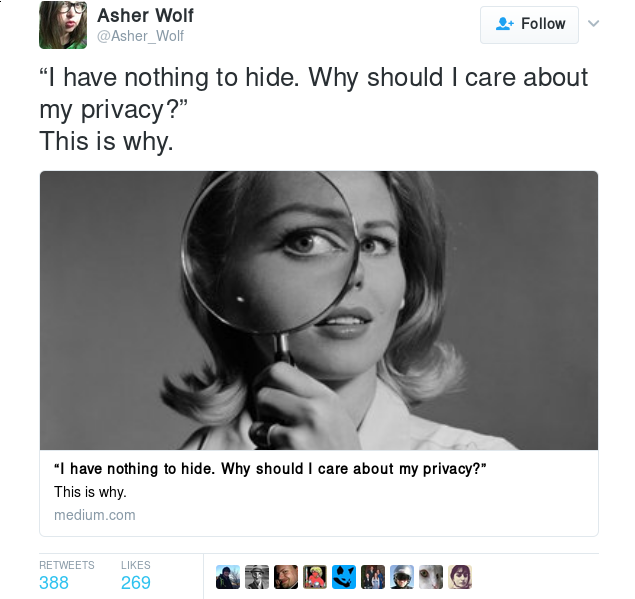 Same data, but with a whole less of noise, don’t you agree?

Well, that’s my story. If you are on twitter and follow a lot of people, I highly recommend you at least take a good look at the list of the people you follow, and ask yourself: “Do I really need to follow this account? Are all his tweets interesting, or do they contain lots of noise?”.

Using a dedicated application instead of keeping one tab of your browser opened all the time on your timeline may help too. (You’ll get a lot of spare RAM as a bonus, by the way …)

Well, that’s all I had to say. Hopefully now you can understand a bit better why I’m trying to write a new twitter clone with an hard-coded maximum of users.

There’s more to this “decentralized social website” of course, so stay tuned for more.

In the mean time, here’s a nice article around the same subject: Quit Social Media. Your Career May Depend on It