This is a follow-up of my previous post on Vim and cwd, so I suggest you go read it first.

If you’ve read the previous post carefully, you may have noticed that the ultimate goal of all the shortcuts I’ve described (<leader>cd), (<leader>ew) or the way I care about the working directory of each vim tab, always boils done to one thing: do not type the same path twice

Here are a few more tricks I use on top of the other vim settings I’ve previously described.

This is useful when you have two terminals open. 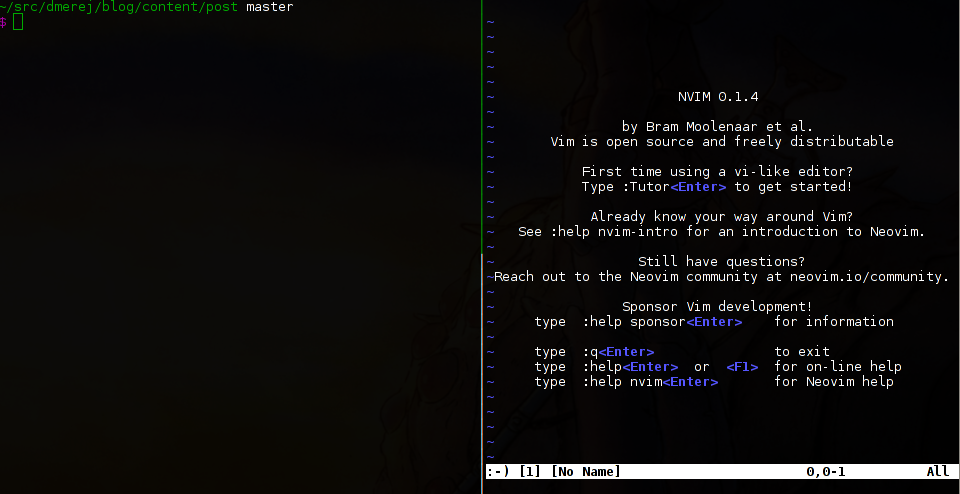 In this case, the working directory on the left is correct, but the vim instance running on the right was started from $HOME

A solution is to use vim --remote hello.md from the terminal on the left.

The idea is that you should use the new RPC interface instead.

You can use a nvr or your own solution.

I use the Ctrl-P plugin.

It has a “Most Recent Used” mode that I find very convenient.

This means that most of the time, I start vim from anywhere, then run <leader>p (which is bound to CtrlPMRUFiles), and only then do I set the working directory. (with <leader>cd, remember?)

So I use this trick to change the working directory of the calling terminal.

First, I use an auto command to write the working dir in an hard-coded file (/tmp/nvim-cwd)

Then I define a zsh function to call the vim_wrapper.py script and change the working directory accordingly:

This tool installs a zsh hook and store every working directory in a “database”.

Then you can just type a small part of the directory you want to go to, and it will use a “frecency” algorithm to get you there.

See the README for more information.

Of course, you want to open the file in vim to fix it.

You can try to carefully select only the filename without the :42 part, or after having copy/pasted the full word, removing the extra characters using backspace.

Personally, I do this in the vim_wrapper.py script:

It tries to see if there are column in filenames, and then starts vim with the correct + option:

Or, when used with the --remote option, opens a new tab and the move the cursor to the correct location:

That’s all folks :) Hope you liked it.